Have you ever considered opening up your land and designating trails or wooded areas for Green Mountain Horse Association Members to ride through? Fifth generation South Woodstock resident, Tina Barr Tuckerman tells us about the benefits and pleasures of sharing her family’s Vermont farm with the GMHA community.

There have been Barrs on the family farm in South Woodstock, Vermont since the early 1900s.  According to Tina, Earl and Aggy Barr (Tina’s grandparents) opened up their land to GMHA sometime in the 1960s with the simple request, “that the land be used appropriately.”

Earl Barr installed a water tank on the property placed there expressly for the horses. One of his greatest pleasures was watching the horses come through and stop for a drink, which gave him a chance to exchange a few words with the riders. Tina says, “My grandfather loved the horses—my grandmother—not so much!”

The horse-loving part must have been passed on to Tina. She was inspired by her grandfather’s enthusiasm and says she literally “grew up” with GMHA, participating in 4-H and other events. Tina says, “I learned so much at GMHA. I was so privileged as a child to be able to go there and use real jumps instead of just hay bales and logs.”

When asked about the benefits of opening private land to GMHA, Tina is heartfelt in her response. “Being a horse person, I just love watching the horses go by—sometimes it’s the only way we see our neighbors! During the 100-mile event, a lot of the competitors stop in, remembering my grandparents. And the letters we get every year—oh, we get such great letters from riders!”

When asked if there are any drawbacks to sharing the family’s land with riders, Tina says with feeling, “I don’t know of any drawbacks. Everyone is so polite and nice! It’s a privilege to share our land and be an ambassador for Vermont. We keep our 125 acres neat and tidy and whether it’s on the back of a horse—or on the back of a snowmobile—it’s just so nice to share our Vermont farm with everyone.  It’s a nice way for us to give back to the community.” 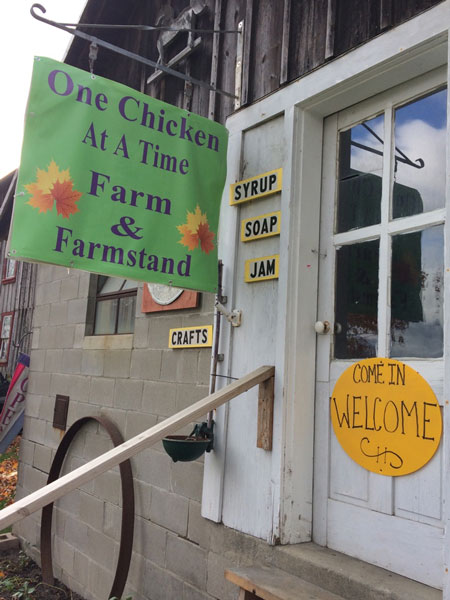 Latte’s Lathers, One Chicken At A Time Farm

In keeping with a time-honored family farm tradition, Tina Barr Tuckerman and her family own and run Latte’s Lathers, which features goats milk soaps containing all natural ingredients. Tina says, “the hand-made soaps are made the old-fashioned way, the way my grandparents used to do it.”

Apparently, “Latte” was the name of a goat that Tina took in. “Latte was found in a mud puddle and than lived with us in the house for three months,” says Tina. “And than one goat turned into eight goats. My husband finally said, ‘What are you going to do with all of these goats? This is no longer a hobby—you have to do something with these goats!’ So I thought to myself, what can a goat do? A goat can make cheese, a goat can make milk—and a goat can make soap. “ Providence stepped in when about that time one of Tina’s daughters developed sensitivity to certain soaps. The dye was cast; soap was the product of choice and Latte’s Lathers was created.

Eight goats soon became 30 and Tina says there are usually closer to 50 during kidding season. Tina says the goats are all “part of the family” and apparently love horses, and have their own horse, Araby. In addition to Latte’s Lathers, the farm sells maple syrup in the spring, and hay and garden produce in the summer.

Latte’s Lathers soaps can be found locally at the South Woodstock Country Store.  Or you can contact Tina directly at latteslathers@gmail.com or face book at www.facebook.com/One-Chicken-At-A-Time