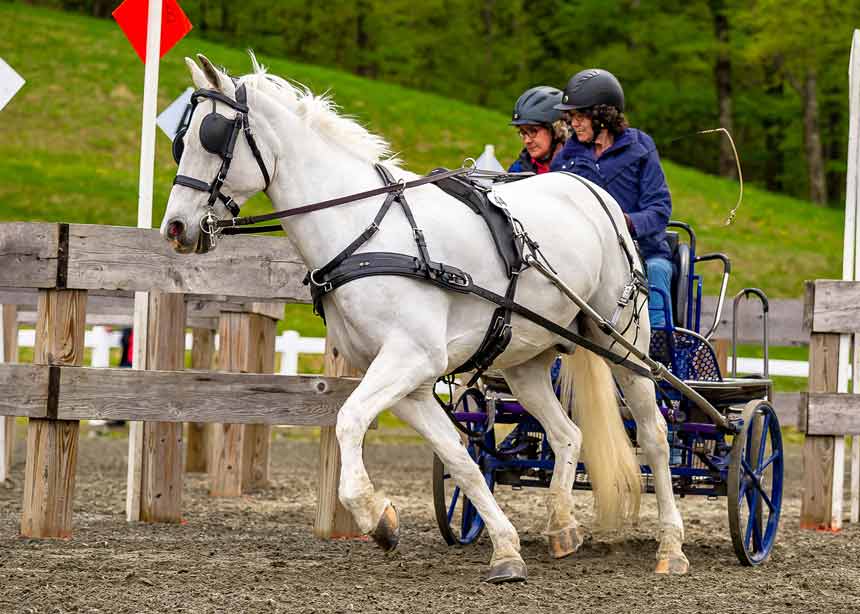 GMHA’s Combined Test and Arena Driving Trials are modified versions of Combined Driving designed to prepare horse and driver to compete in a full CDE.

The Combined Test, or Two-Phase, includes dressage and cones. Scores from each phase are combined.

Driven Dressage tests are judged similarly to a ridden dressage test, but in a much larger ring. The drivers are required to perform a set of movements which include changes of pace, circles, turns, and extensions. Each movement is judged and scores are tallied.

The object of cones is to drive through a course of narrowly spaced pairs of cones cleanly within time allowed. Each cone has a ball placed on top, and any miscalculation will dislodge the ball, thus incurring a penalty. This phase tests the fitness, agility and obedience of the horse and the accuracy and skill of the driver.

The Arena Driving Trial includes dressage, cones, and arena obstacles. Scores from all phases are combined.

Arena obstacles were created as a way to compete in marathon obstacles without a full cross-country marathon. Two hazards are set up at either end of an arena, with a start and finish line across the center of the arena. Obstacles consist of sturdy obstacles marked with gates, which drivers must complete in the correct order. Competitors are timed as they drive each hazard twice. Penalties are awarded for time and knockdowns.

We need your help to make this event a success! We’re looking for scribes, ring stewards, timers, scorers & more.

GMHA requires a negative Coggins and proof of rabies vaccination within 12 months for each horse that comes on the property.  Rabies titers are accepted within one year of event date and must accompany a note from your veterinarian explaining the reason why the vaccine could not be administered.

Please note that the State of Vermont requires a Certificate of Veterinary Inspection within 30 days or Exhibition Permit from the Vermont Agency of Agriculture’s Animal Health office for any horses entering the state. GMHA does not require these documents with entry, but the VT Agency of Agriculture may enforce these regulations at any time.